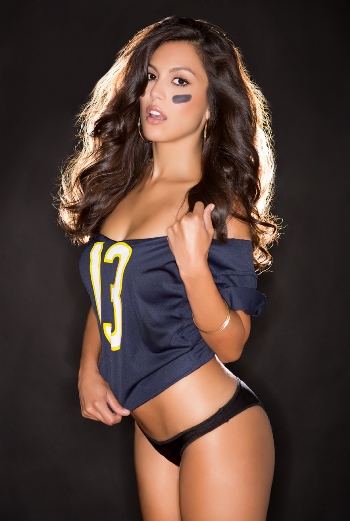 Raquel Pomplun, 25, is the first Mexican-American woman to land the Playboy’s coveted “Playmate of the Year” title.

Raquel definitely deserves the title. While she’s undeniably sexy, beautiful and drop dead gorgeous, Raquel is also changing history by becoming the first Mexican-American to be named “Playmate Of The Year.”

A luncheon was held in Raquel’s honor on May 9, at the Playboy Mansion in Holmby Hills, Calif., where Hugh Hefner announced the news and revealed Raquel’s June 2013 “Playmate Of The Year” cover, according to Us Weekly.

“This year’s Playmate of the Year is a winner in every way,” Hugh, 87, told Us Weekly. “Since becoming Miss April, Raquel has become extremely popular through personal appearances…She’s been a host on Playboy Radio’s Playboy Club and Playboy Presents. She’s a member of the Playboy Dancers. She’s also appeared as a host on Black Belt TV — so don’t mess around with her!”

Check out Playmate of the year 2012 Jaclyn Swedberg