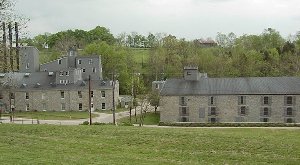 Woodford Reserve is a brand of premium small batch bourbon whiskey made in the Labrot & Graham’s Old Oscar Pepper Distillery, near Versailles, Woodford County, Kentucky. The name was changed to The Woodford Reserve Distillery in 2003. The distillery is located in the heart of the horse farming country, off U.S. Route 60 between Interstate 64 and Versailles, offers tours, and is part of the American Whiskey Trail and the Kentucky Bourbon Trail.

Woodford Reserve is the “Official Bourbon” of two of horse racing’s most important events: The and the Breeders’ Cup. It is a 90.4 proof bourbon. One of the notable features is the numbering system that is used on each bottle. Every bottle is individually numbered with the batch number and bottle number.

The distillery itself has been in operation since 1812, making it one of the oldest of nine working bourbon distilleries in Kentucky. In 1995, the distillery was listed on the National Register of Historic Places. In 2000, it was designated a National Historic Landmark.

The distillery was originally built by Elijah Pepper. It was known as the Oscar Pepper Distillery when Dr. James Crow worked there in the 1820s and 1830s. During this time he is credited with developing the science of sour-mash fermenting. The plant later became part of a group of Glenn’s Creek distilleries operated by Colonel Edmund H. Taylor. It was purchased by Leopold Labrot and James Graham in 1878. Labrot and Graham operated it (except during Prohibition) until 1941. Wartime restrictions bankrupted Labrot and Graham, and the facilities were sold to Brown-Forman. They operated it until 1968 and then sold it in 1971. According to master distiller Lincoln Henderson (as of 2005), in 1994 Brown-Forman, while searching throughout several states for a location to “start up an old distillery with a lot of heritage”, re-discovered their old property and re-purchased it. They also spent over seven million dollars to refurbish and restore the facilities.