Let’s Go Back in Time

As American as we think denim is, the history of blue jeans goes back to XVI Century Europe. It’s amazing that a product developed 500 years ago fuels today’s multi-million dollar denim industry. Who would have thought back in Genoa in the 1500’s that the material worn by Genovese sailors in their everyday pants would evolve to become the textile and fashion industry phenomenon that denim is today.

The story goes that “jean” derives from the word Genoa. It refers to the material that sailors from Genoa used in their pants. This was a coarse cotton-wool and/or linen blend. It originally came from Italy, and is evidence of the custom of naming a material for its place of origin. By the late 16th century, jean was already being produced in Lancashire, England. The composition eventually evolved to 100% cotton by the 18th century.

The History of Denim

On the other hand, the origin of the term “denim” can be traced to late 16th century France where a fabric known as “serge de Nîmes” (Twill from Nîmes) was very popular. Some doubt remains as to whether the contraction “denim” actually came from this French fabric or another twill called “nim”, also used in France at the time. “Serge de Nîmes” was a blend of silk and wool, which leads some historians to doubt if this was truly the origin of modern day denim. Either way, the history of jeans goes this far back in history.

By the late 19th century, weavers in America were making twills in the same fashion as the European denim, adapting to the more readily available and locally produced cotton fibers. The material had a reputation for being very strong and not wearing out quickly, in spite of many washes.

Jean and denim remained two very different fabrics, and were used for different types of clothing. Denim was used mainly for workers clothes and jean for lighter clothes that did not have such high durability requirements.

So, how did the modern term “jean” come to refer to pants made out of a fabric called denim? The answer lies in the story of Loeb (Levi) Strauss. This is where the modern history of blue jeans starts. 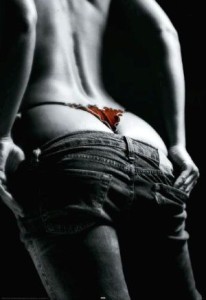 Mr. Strauss came to America from Bavaria in 1847 with his mother and two sisters. They arrived in New York where his half brother ran a wholesale business selling, among other things, various types of fabrics and clothes. After working for his brother for a few years, Levi decided to travel West to San Francisco and partake of the benefits of the Gold Rush.

His original intent was to open a branch of his brother’s wholesale business. Levi did this diligently for the next 20 years, acquiring a reputation as a quality supplier to small stores throughout the West.

His fate and the history of clothing would change forever when in 1872 he received an offer from Jacob Davis, a tailor from Reno Nevada. Mr. Davis, in order to improve the durability of the pants that he made for his clients, had been adding metal rivets to the highly stressed seams. The idea was successful and he wished to patent it. Lacking the money to do so, he turned to Levi for financial backing, and of course, a partnership. In 1873, the new partners received a patent for “an improvement in Fastening Pocket-Openings”, and thus the history of blue jeans as we know them begins.

They started making “waist overalls” out of denim and cotton duck. They knew that the selling point of the new product was its durability, making it more appropriate for work clothes. Eventually, the cotton duck was dropped for the more comfortable denim.

The History of Blue Jeans and Denim

The company grew in size and fame. By the 1920’s “waist overalls” were the most widely used worker’s pants in America. The name “jeans”, however, was not officially adopted until the 1960’s. Levi Strauss and Co. recognized that it had no choice, as this was what the product was being called by the young, leisure loving teenage boys. The history of “waist overalls” continues as the history of blue jeans. “Jeans” is now generally understood to refer to pants made out of a specific type of fabric called “denim”.

50s Fashions: By 1950, Levi’s began selling nationally. Everybody now had a chance to wear a pair of original Levi’s Jeans, as they were now called. Other brands emerged, such as Lee Coopers and Wranglers, each with its own particular fit.

The rise of the popularity of jeans after the WWII can greatly be attributed to the influence of the film and music industry. This effect is not hard to understand, as even today fashion trends are greatly influenced by what highly publicized celebrities choose to wear. The history of blue jeans in the second half of the century can be traced to the celebrities that used denim.

In the 1960’s and 1970’s they were embraced by the hippy movement, and the trend to personalize and embellish jeans began. The history of blue jeans gets linked to the downfall of communism! Behind the iron curtain, jeans became a symbol of “western decadence” and individuality and as such were highly sought. Hip-huggers, bell bottoms, baggies, and elephant ears were the craze. Pre-washed jeans were first marketed.

In the 1990’s, although denim was never completely out of style, it did fall “out of high fashion”. Denim was still hot, but the new generation turned to other fabrics as well as other styles (khakis, chinos, combat, carpenters and branded sportswear).

The new milenium: All borders are down. Denim is everywhere. Denim is back on designer’s catwalks, on accessories, home collections, designer jeans by the hundreds of labels. Price barriers have been broken. Washes and finishes, embellishments, destroyed and distressed jeans, ultra low rise jeans, … the palette available to designers offers limitless possibilities, and the market appears to never bottom out. The history of blue jeans goes on…