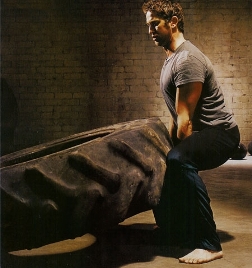 Buzz about the movie “300” increases in volume as its release date approaches. Because we were responsible for the fitness and appearance of the barely-clothed protagonists we are fielding calls regarding the training undertaken by cast and stunt crew. Since it was a Hollywood gig assumptions are made about the preparation, with a 50-50 split between accuracy and utter madness. The following explanation should help to rectify the more erroneous ideas about what actually happened.

Part of the Warner Bros press kit reads, “To support fight preparation the training emphasized athleticism by combining compound movements, lifting, and throwing. Primitive tools – medicine balls, Kettlebells, rings – were used instead of machines. Each session was competitive, with a penalty-reward system tied to performance and results posted daily for all to see.”

This sort of training seems perfectly normal to us but others find both the work and our language unusual. Gerry Butler commented that, “the first time anyone ever told me I was ‘fat’ was after I got this part.” Many observers got hung up on the penalty part, or the fact that one penalty session was called “Loser’s Redemption”. One individual commented, “You call people ‘losers’? That’s unkind.” And the answer is that we’re not here to make friends; there’s a job and it’s got to be done.

The typical interviewer wants to know about the “magic” workout the cast did to make them look so good. Some were disappointed to learn that hard work is magic, while others marveled – as did we some days – that the actors would work so hard.

The first misconception is that we used a bodybuilding-type program of progressive overload and over-feeding with the goal of making the guys look huge. We took the opposite route of calorie restriction to make them look like they lived off the land, in the wild, all sinewy and ripped. The diet was adequate to fuel effort and recovery, barely. And we prescribed random physical challenges to keep them off balance, to ensure they never knew what was coming, to cause a stress-reaction, to break them, to make them look bad in front of each other, which eventually led them to trust one another. Trust made them willing to go all the way to the edge in each other’s company because that’s what the film was about: laying it on the line. Because fight training and conditioning and eating took place in the same facility – essentially in the same room – the actors and the stunt crew did everything under the watchful eyes of everyone else. Dietary slip-ups were noted, nods given when a particularly hard effort put forth, and general awe expressed when complex choreography was executed without flaw. 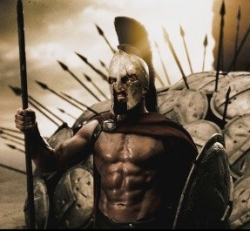 Our general approach and attitude, the movements and activities were new to many. Some, of course, resisted while others took to the process with unusual zeal. Our goal, outlined by director Zack Snyder was to “turn them into a gang,” a unified force whose trust and belief in one another would be obvious on the screen. The first step of any such project is to earn the respect and belief of the trainees. Zack helped by charging the cannons himself, training with us 3-5 days a week. On those days cast and crew arrived in the gym at 8:30am to find Zack’s workout already posted on the whiteboard. Knowing he got up and had already earned his calories for the day spurred them to higher levels of effort. “Some of us wake up, others roll over …”

The cast and stunt crew also had to be fit and athletic enough to handle the fight training, choreography and execution led by Damon Caro and Chad Stahelski. To achieve the objectives we adopted the following mission statement: appearance is a consequence of fitness and this ideal guided our work. My assistant, Logan Hood and I were part team-builder, part corruptor, part coach, and part punisher. We led by example and despite some overuse injuries, which are to be expected since we were in the gym 10-12 hours a day, five days a week for four months, our own fitness improved along with the men we trained. In one interview Gerry Butler summed up his experience with us when he said, “Pretty much anything Mark Twight offered up was so difficult in the kind of way where you wish you had never been born – and even more than that, wished he had never been born.”

To ensure that the guys would last for the entire project we addressed recovery as well as hard work in our process: we had a massage therapist on-site every day and a kinesiologist visited twice per week to treat anyone ailing. Our work had the unintended consequence of keeping the stunt crew healthy. “It was a tremendous help as far as injury prevention, stamina, and overall focus,” says Caro. “With fight choreography, you only have a certain amount of time for physical training because it sometimes doesn’t mesh with the functional application. What Mark brought to the project was functional strength, not just sculpted biceps or ripped abs.” In this case, “functional” means fitness appropriate to the task, and the positive result means the artificial training was highly transferable. The methods we used were right for this job. A different objective would be achieved by different means. In our work the task drives the method.

The method was sometimes harsh – anyone who fell off the bus over the weekend got smashed in the gym on Monday – the pressure turned some rough raw material into real gems. And this is apparent on the big screen.

The second misconception surrounds the idea of the Spartan workout, aka “300”, how frequently it was done or who actually finished it. “300” is a one-time test, an invitation-only challenge undertaken by those deemed ready for it. By the end of our four-month project 17 people had done the workout (Logan and I were two of them). This constitutes about 50% of the cast and stunt crew. We supervised every test, evaluated each rep for quality and only counted those that achieved our standards for form and range of motion. Like many workouts “300” is not hard once you’ve done it but the apprehension built up ahead of it – something we encouraged – was enough to make some guys fear it to the degree that performance was compromised. This workout was a crucible that some passed through and others still have hanging over them.

As for the training done on a regular basis there were no consistent, structured workouts. In fact, very few ever repeated a workout during the four-month voyage. The point was to improve fitness and facility across a variety of movements and through the three-dimensional range-of-motion required by the fighting. We did this by constantly changing the challenges, and focusing on athleticism to build a balanced foundation of general physical capacity. Butler commented that my idea of a workout is to “go until you are actually in fear of your life and then go further. Then, you do more.” He drew the connection between the physical and the psychological when he said, “It was preparation, too, for the mindset of King Leonidas. The Spartans were trained to be the best, and why be bashful about being the best? We, the Spartans, know who we are so completely that there’s no way an outsider can understand.” And, I suppose, this is more or less the way we described and prescribed the training for this project: the physical difficulties prepared the mind for the role.

Did it work? It worked for those who did the work, who paid attention, and who controlled what they put in their mouths. We reinforced those who started with their own self-discipline but we could not give discipline to anyone who didn’t already have it. In the end Vincent Regan shed 40 pounds in eight weeks, and took his deadlift from less than bodyweight (205) to more than double-bodyweight (355). He could pull 85% of 1RM blindfolded and recite Shakespeare in the midst of the toughest training session. Andrew Pleavin trained with us for just five weeks. He increased his maximum number of pull-ups from 6 to 23, rowed 500m in 1:25.6 and 5000m in 18:12, and he finished “300” in 18:11. Some of the stunt crew experienced similar changes, and their work capacity was – in most cases – higher. Even the ones who were relatively fit when they showed up increased their overall fitness by having weaknesses exposed and prodded.

This was an absolutely incredible experience and one I don’t think could be repeated. From writers to director, and actors to stunt crew, it would be difficult to reassemble such talent, dedication to craft, the willingness to work hard, and to work terrible, long hours when necessary. I am happy to have had an influence, and to have taught an ideal to some of the younger stunt crew. I learned as much as I taught. Yes, it’s the movie industry, and it’s make-believe, but the energy and effort behind it is human, and in this case some of them were very good humans indeed.

To see descriptions of what the cast and stunt crew of “300” were subjected to during filming search the calendar in the Schedule section. The workouts described there are not a recommendation, and this is not a program. What you see is a tool we used to do a job. There are many tools in the box. If you decide to do any of the workouts take responsibility for your decisions and for the load you use. You make your own bed. Be willing to lie in it.