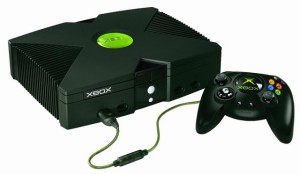 Okay….. so maybe your getting tired of all the dope out there ? Too many hangovers and side effects ? I found the best dope is the Microsoft Xbox game console. Why you ask me ? Well, easy, put in your favorite game into your Microsoft Xbox console and see ya later world. I love xbox games so much that I can play an xbox game for 8 hours straight and look up at the clock and say “where did the time go ?” Yup, the xbox is the best escape from the real world I do say. One of my favorite games I play on the xbox is Jedi Knight – Outcast. This game lasts forever ! I still haven’t finished it yet and it is a good adventure game. I have played it for like 3 or 4 hours every 2 days so far for the last month and it still is not done!

So, I have owned these consoles : atari 2600, super ninetendo, ninetendo, genesis, sony playstation one. Right now, I own a sonyplaystation 2 and an xbox. I find the ps2 and xbox to be the same almost. The graphics on both of them I have found to be the same. But, the xbox has a hard drive in it where you can play games and listen to your favorite music at the same time. So, if you have music on cds, you can put them on your xbox hard drive and listen to them while you play the game! But you have to have an xbox game that can do that. Grand theft auto – vice city and True Crime Streets are 2 games that can do that. They have a bunch of radiostations in them to listen to when you drive a car in the game ! But you don’t need an xbox game to listen to your favorite music cds. You just put in your music cd in the xbox and away you go ! The best part of that is, you can put your favorite music cds on the xbox hard drive and save the life of your cds !

So why did I buy an xbox instead of something else you wonder ? I bought the xbox because it has rare games that most other game consoles don’t have. Games like Oddworld – Stranger’s Wrath, Half-Life 2, Spawn and Jedi Knight – Outcast. I also got an xbox because I didn’t have a big enough computer to play PC games on until now. You need a modern big comuter to play PC Games these days. Sluggishness and slowness happens on an older computer and really wrecks your PC gaming. Now I can play those slow lagging PC games on my xbox instead !!

So now your maybe wondering if the Microsoft Xbox game console is affordable for you. Well, you could do what I did. I bought a broken xbox from ebay and fixed it. It only cost me about $70 all together. What you say ? I can’t fix anything. Well, all I did was did a google search on “xbox repairing or how to fix an xbox” and I got to a good website that told me step by step on how to fix the xbox. All I had to do was replace the dvd rom of the xbox(that’s the part of the xbox where you put your game into). I also used an xbox repair guide to get the xbox back to new. So, If I wanted to buy a cheap xbox that worked, I would more than likely buy one that has a dvd rom that needs to be fixed or replaced and do the same thing as I did before. But for now my Microsoft xbox works like brand new and I’ve had this xbox for about half a year now. I have not had any problems with it since I fixed it.

So the Microsoft Xbox is the best dope there is for me, how about you ?