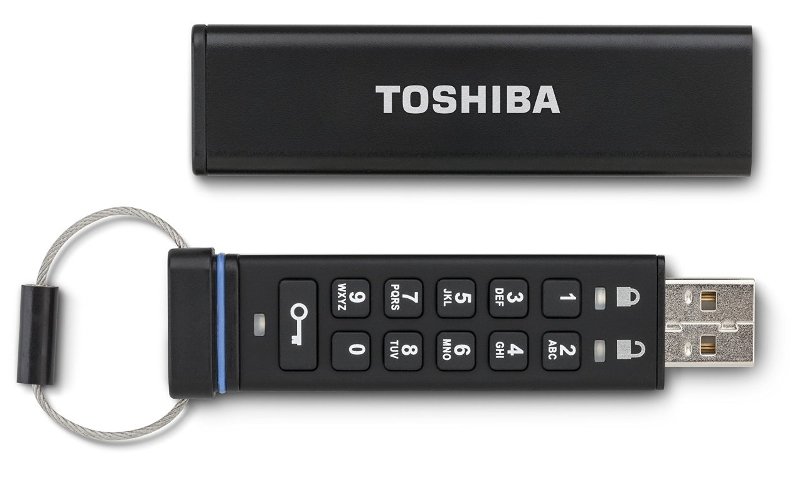 Introducing Toshiba’s new Encrypted USB Flash Drive. Available in 4GB, 8GB, 16GB and 32GB, Toshiba’s Encrypted USB Flash Drive utilizes a hardware based encryption process built into the device to deliver a robust, secure (military grade AES 256-bit encryption), easy to use and affordable solution to safely make sensitive data portable. Security at Your Fingertips The Toshiba Encrypted USB Flash Drive utilizes a mini-keyboard to authenticate access. The drive also incorporates a rechargeable battery allowing the user to authenticate access before plugging into a USB port. Users simply enter in their secure PIN and plug the drive into any USB 2.0 port on a compatible device. Once access is authenticated, the drive “unlocks” the media permitting access to all of the content stored on the drive. Once work is completed and the drive is removed from a USB port, the drive automatically re-locks and encrypts the stored media with a hardware based 256 bit, American Encryption Standard (AES) algorithm, designed to meet the standards developed by the U.S. government for the protection of sensitive information. Security and Peace of Mind If for some reason, the Toshiba Encrypted USB Flash Drive becomes lost or stolen, there is no need for concern. This robust device is equipped with a Brute Force Hack Defense Mechanism which will render irrecoverable all stored information after ten (10) consecutive unsuccessful attempts to enter the secure PIN.