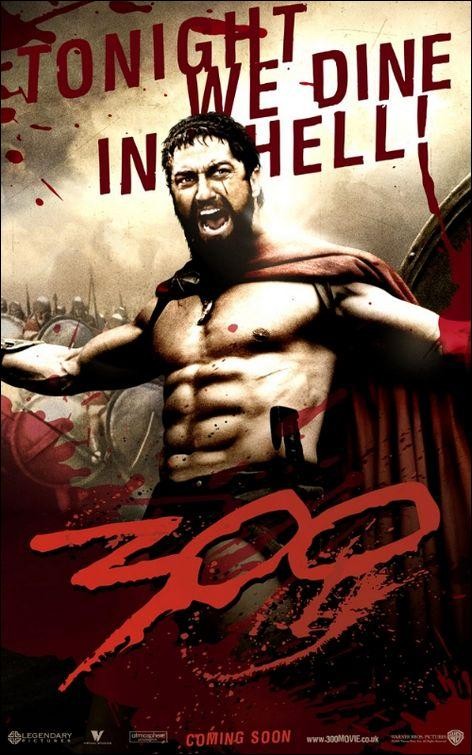 300 The Movie based on Frank Miller’s graphic novel, with direction and a script from Zack Snyder, 300 stars Gerard Butler (Timeline Dear Frankie, The Phantom of the Opera as King Leonidas, ruler of Sparta. Though some dramatic license is taken, the basic story is based on a true events that took place in August 480 BC in Greece at the battle of Thermopylae. Leonidas and his personal army of three hundred Spartan solidiers take on the invading Persian army of King Xerxes, one million men strong. The intent of the Persians is to enslave the people of Greece and make them part of their empire. Against tremendous odds, Leonidas and his army show tremendous strength and fortitude as they fight valiantly against what seems a quick, certain death.

Forget about acting, or dialogue, or depth of character. This is a high-octane movie about an epic battle, and it doesn’t pretend to be anything but that. Sure, there is a lot of barked-out dialogue and one-dimensional characters, but it’s a visually stunning action movie filled with blood and gore. If that’s what you’re into, this delivers in spades. The cinematography is what seperates this from something like Gladiator. The hypersaturated look really accentuates the truth of this being a graphic novel brought to film. The score is effective in creating excitement as the scenes of brutality are shown in full bombast. Another feather in its cap is the flawless integration of CGI with live action. Overall, 300 The Movie is, if nothing else, a delicious visual treat. Rent it. Make some popcorn. Sit back, and enjoy.