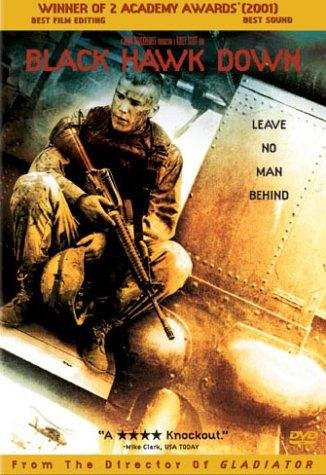 Black Hawk Down is based upon the Mark Bowden book of the same name. Ridley Scott is the director in this true story of U.S. special forces mission gone bad in Somalia in 1993. Not for the faint of heart, this is one of the most intense combat movies ever made.

In 1993, the U.S. sent troops to Somalia on a “humanitarian mission” to aid the U.N. with food distribution to a nation that had seen 300,000 people starve to death. Somalia was under control of the warlord Mohamed Farrah Aidid who was more interested in using food and starvation to increase his power. In October the U.S. planned a mission to raid a meeting of Aidid’s top lieutenants.

The plan called for the meeting to be stormed by Delta Force and Ranger troops to be inserted via helicopter backed up by a ground based convoy. The whole mission was to last less than 30 minutes. The enemy had been drastically underrated however. They turned out to be very well armed and able to call up huge numbers of reinforcements very quickly. Two helipcopters went down and the convoy was blocked off by road blocks and under heavy fire. The special forces on the ground were left to fight for their lives until reinforcements could be assembled and sent in to get them.

Black Hawk Down avoids getting too political in it’s presentation of these events and instead focuses solely on what it’s like to be a soldier in the middle of intense combat. Indeed Black Hawk Down spends maybe 30-40 minutes introducing us to the characters and setting up the mission and the remainder of the film is one big fire fight. Ridley Scott does an absolutely wonderful job of putting us in the middle of it.

Unlike most war movies, we do not really have a single hero here, but rather a bit of an ensemble that realistically shows how one soldier is dependent on the man next to him. The cast includes strong performances by Josh Harnett, Tom Sizemore and William Fichtner along with Sam Shephard as Major General Garrison.

Black Hawk Down includes perhaps the most realistic combat sequences ever filmed. Imagine the D-Day landing scenes from Saving Private Ryan stretched out into a 2 hour movie, and you get the idea. And yes, with realism comes more than a little blood and intense violence. If you can stand the violence though, this is a movie that needs to be seen, especially given the events going on in the world today.