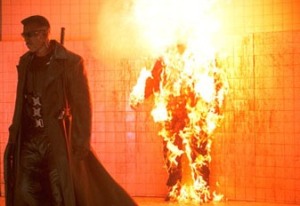 The familiar stereotypes of the vampire overlord, the female victim and the dedicated hunter are firmly in place, but with a modern, cyber twist. Based on the successful Marvel Comics series, ‘Blade’ is kung fu cool meets ‘The Matrix’ – the real world is a different place to what you thought.

Blade is a half-vampire who hunts the undead to avenge the death of his mother, who was bitten while pregnant, thus giving him “all of our strengths, non of our weaknesses”. Referred to as “the daywalker” by the creatures he hunts, he is aided by Whistler, a semi-alcoholic, laconic sidekick who lost his family to vampires and Karen Jenson, a haematologist. Snipes plays Blade as a tortured, granite-faced warrior with a spirituality the audience is supposed to compare to that of Samurai. Complete with deadpan one-liners, he stalks and stakes with gusto, never quite revealing any wimpy emotion.

The uber-villian of the piece is the designer-shirted Deacon Frost, played with menacing cool by former brat-pack actor, Stephen Dorff. Frost has discovered an ancient ritual that will resurrect ‘La Magra’ – the Blood God, who is capable of triggering a “vampire apocalypse”. This ritual also happens to require the blood of the daywalker, setting the scene for a climatic showdown between the hunter and the overlord.

Surrounded by a cadre of underlings, the most three dimensional of whom being Quinn, a playful heavy with puppy dog enthusiasm, Frost is far from the traditional vampire. In Blade’s world, vampires are not creatures that skulk in cemeteries impersonating Bela Lugosi on a bad day – they are powerful figures in business and politics with vast financial resources. They have Swiss bank accounts, ultra-modern penthouse apartments and complete control over the authorities due to a back-alley treaty with the government.

Frost represents a threat to the established way of vampire life enforced by the House of Erebus – a ruling cabal of twelve elders who live by the maxim ‘we do things quietly and the humans will leave us alone’. By conjuring La Magra, Frost hopes to enslave mankind.

‘Blade’ is a film that is very much a triumph of style over substance. The action sequences, especially the final confrontation between Blade and Frost, are spectacular, although the disintegration of vampire corpses does become a little wearisome.

The initial scenes in the vampire nightclub have a body count rivalling that of the goriest shoot-em up computer games. Everyone looks good, whether it’s Frost’s trendy haircut, or Blade’s cyber-warrior cool, complete with tribal tattoos. The array of weaponry and gadgets is impressive, special mentions going to Blade’s titanium katana and Karen’s ‘vampire mace’ comprising of garlic and silver nitrate.

The plot is hardly Shakespearean, racing from one sword-twirling slaughter to another, but is redeemed by some eerie flashback moments. The sarcastic, sometimes snappy dialogue oozes street cred and provides a nice foil to the action sequences.

Characterisation is a problem, with most of the cast either cardboard cutout ‘goodies’ or ‘baddies’. An exception to this is Blade. Although the villain has evil written through him like a stick of rock, the hero is not as lily white as the usual hunter – Blade has to constantly battle his vampire side.

Karen Jenson initially looks promising as a doctor with the potential to cure Blade’s thirst, but quickly lapses into the victim role with occasional bursts of heroism. One obvious oversight in the film is the twelve ‘pure bloods’ of the House of Erebus – they are woefully underused.

Overall, ‘Blade’ is a frenetically paced cyber thriller for a new generation of vampire fans. Despite its faults, it is a welcome addition to a genre that was in danger of collapsing beneath the weight of cliché. Leave your brain in a jar by the door, enjoy the action and be prepared for a desire to don kevlar body armour and learn kung fu.