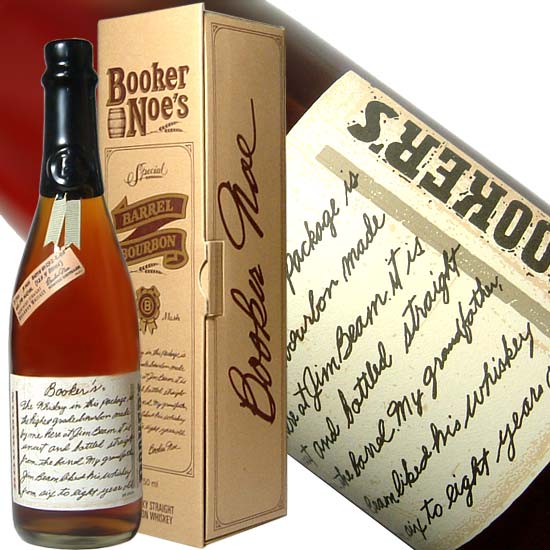 In 1988, Booker Noe introduced his own signature bourbon, Booker’s True Barrel Bourbon. Inspired by a 200 year-old tradition, Master Distiller Emeritus Booker Noe, grandson of Jim Beam, created his very own bourbon. Unlike anything you have ever tasted, Booker’s is the only bourbon bottled straight-from-the-barrel — uncut and unfiltered — a true connoisseur’s sipping bourbon.

First created as a holiday gift for his special friends, Booker’s whiskey was so well-received that he decided to make it available to bourbon lovers worldwide; much to the joy of spirit connoisseurs everywhere. Booker’s Bourbon delivers a range of intense flavors from oak-tannin and smoky vanilla to lighter tones of mocha and coffee. Add spring water to customize the taste and finish to your palate. The complexity provided by this straight-from-the-barrel bourbon makes Booker’s the rarest, absolute best bourbon you can buy.

Booker’s Bourbon is the only uncut, unfiltered, straight-from-the-barrel, connoisseur’s sipping bourbon available today. It’s bottled at its natural proof of between 121 and 127, and aged between six and eight years. Booker Noe, Jim Beam’s grandson and master distiller emeritus, hand selects each barrel that will become Booker’s Bourbon. Each barrel that will become Booker’s bourbon is aged in the very center of the rackhouse where the temperature and humidity combines in the perfect proportion for the finest bourbon. This is truly the absolute best bourbon available.

Booker is a legend. The big man who talked like a Kentuckian and thought like a philosopher had a contagious personality. People couldn’t resist him. He joined the family business in 1950, learning from his uncle T Jeramiah Beam, who was James B Beam’s son. Ten years later he became master distiller. Booker may have been a Noe, but Beam ran in his blood — his mother was Jim Beam’s daughter. He introduced small batch bourbon to the public, revolutionizing the bourbon industry. The first landmark small batch bourbon was appropriately named Booker’s Bourbon, as it was hand-picked by Booker himself.