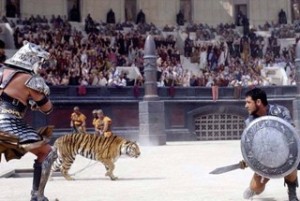 Gladiator” represents a return to the big scale sword & sandal epics of yesteryear. Stories of ancient Rome were at their peak in the 1950’s & 60’s with films such as “Ben-Hur”, “Spartacus”, “Quo Vadis”, “Cleopatra”, “The Fall of The Roman Empire” & of course the film that started it all “The Robe”.  Starring Richard Burton & Victor Mature “The Robe” is credited as being the first movie to be screened in glorious Wide-screen Cinema-Scope. Now with the release of Ridley Scott’s “Gladiator” a new generation of movie-goers can enjoy the spectacle & grandeur that was ancient Rome.

The plot revolves around Richard Harris (Marcus Aurelius) the philosopher-king who is assassinated by his only son Commodus (Joaquin Pheonix) because his father Aurelius wanted General Maximus (Russell Crowe) to rule Rome rather than himself or his sister (Connie Nielsen). When Aurelius dies Commodus orders his soldiers to kill Maximus. Escaping death but not enslavement Maximus becomes a Gladiator & has to survive many bloody battles in the arena before he can exact his revenge on Commodus, hence the powerful slogans in the advertising campaigns “The General who became a Slave. The Slave who became a Gladiator. The Gladiator who defied an Empire”.

Nominated for 12 Academy Awards and winner of 5 including Best Picture & Best Actor, “Gladiator” is visually stunning & crammed with a multitude of dazzling special effects. It features some of the best-staged gladiatorial action sequences in motion picture history. “Gladiator” was made on a budget of $103 million and grossed over $187 million at the US box office alone. Masterfully directed by Ridley Scott & featuring brilliant performances from the entire cast “Gladiator” is a larger than life movie experience. Don’t miss it.