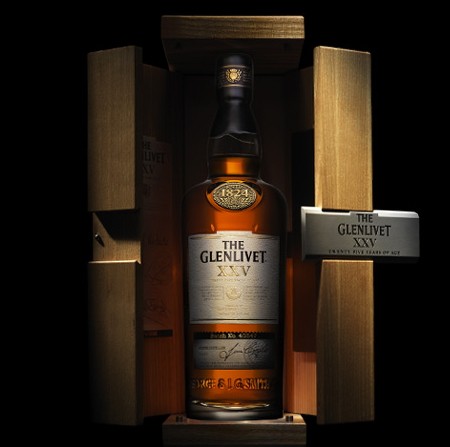 The Glenlivet, has introduced The Glenlivet XXV single malt which is its oldest permanent release in the range. TIt is the latest expression of a single malt whisky whose incomparable pedigree dates back nearly 200 years. To make this sublime whisky requires individual craftsmen and traditional skills.

The initial release of The Glenlivet XXV is a 1980 vintage selection which has been ‘finished’ in first-fill sherry butts for a period of nearly two years. Presented in a crafted wooden box reinforced by limestone, the exquisite packaging for The Glenlivet XXV perfectly reflects the quality of its contents. Each batch bottle numbered is a testimony to the care and craftsmanship that go into the making of The Glenlivet XXV. The use of the wax seal on the bottle reinforces the precious nature of the contents within.

The story of craftsmanship is told through the certificate of quality displaying the signatures of those responsible for ensuring the required standard has been met at the four key stages of the production process. An accompanying booklet introduces the people behind the product.

Neil Macdonald, Brand Director for Malts at Chivas Brothers, comments: “We expect The Glenlivet XXV to be met with excitement by whisky enthusiasts around the globe. The Glenlivet XXV is made to an exceptionally high standard and the craftsmen responsible can be immensely proud to put their signatures to the product.”

The oloroso-soaked oak cask imparts a nutty spiciness to the multi-layered flavour of The Glenlivet XXV and enriches its colour. It has intense raisin and fruity flavours on the palate, finishing with balanced dry oakiness.