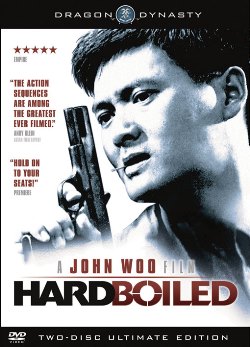 For fans of Asian action cinema, this movie is legendary, and for good reason.  This was the last movie John Woo made in Hong Kong before departing for his lacklustre American directing career, and he wanted to go out with a bang.  So he concocted a crazy story about an archetypical “cop on the edge” named Tequila, and he hired his frequent collaborator Chow Yun-Fat to play him.  It would be the last time Woo and Chow would team up (unless you count their work on the Tequila video game Stranglehold), and now that the two appear to have had a falling out, this may stand as the final collaboration between two titans of Hong Kong cinema.

Good thing they made it count.

The plot is a mess about Tequila, Triad bosses, and an undercover cop (Tony Leung) caught in the middle, but none of that really matters.  The story is nothing more than a flimsy framework upon which to hang a series of the most lunatic action scenes ever committed to film.  Each tops the other, leading to a lengthy sequence inside a hospital that has more bad-ass moments than most action movie-makers’ entire filmographies.

All of the usual Woo themes are present: honour, machismo, and unlikely friendships in stressful circumstances.  Woo makes some of the best movies about men as we wish we were, and Hard Boiled is a prime example.  It is fantasy-fulfillment with no brakes.

Is there violence?  Oh, my, yes.  Woo’s films are often noted for the “ballet-like” nature of the action choreography, and Hard Boiled is crammed full of it.

Are there explosions?  A few, including one massive hospital explosion that Tequila escapes by jumping out the window on a cable while holding a baby.  Beat that, Bruce Willis.

Are there hot chicks?  Well, no.  Not really.  But trust me, the non-stop crazy violence more than makes up for it.

What are the highlights?  The hospital finale, which leaves the viewer exhausted and jittery and with a big, post-coital action-lover’s smile upon his face, and Chow Yun-Fat’s performance as a virtual parody of every American “out of control” police officer ever.

Simply put, I don’t think you can realistically call yourself a man if you don’t own Hard Boiled.  It is exciting, funny, and so over the top that it leaves the ground early and doesn’t come back down until some serious chaos has been sewn.  If you proudly display this disc in your movie collection, people are going to know that you’re an action lover of refined taste.  It’s a movie for and about men, but ladies like it too because of the handsome Chinese guys.  You can’t really go wrong.

More movies like this: A Better Tomorrow II, The Killer