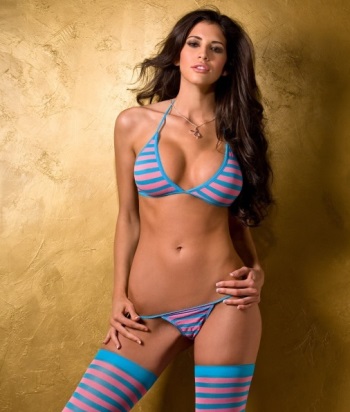 Inviting eyes, long flowing hair, perfect curves, hot body, flawless face, oozing sensuality, the torrent download since the year 2009, the ultimate male fantasy, vivacious and yet down to earth- that’s Hope Dworaczyk, the 2010 Playmate of the Year. Born on November 21, 1984, at Port Lavaca, Texas, this American model has done it all- Voice Over, Film, Radio, Commercial, Television and a host of modeling assignments.

She first created stirs when she appeared on the cover of the April 2009 Playboy issue together with Seth Rogen in which her centerfold picture had been photographed by Stephen Wayda. The year 2010 shot her to fame when she was selected the Playmate of the Year and her PMOY pictorial in the June 2010 issue of the magazine includes a 3-D fold out image of her.

It all started for Hope when she signed with her first modeling agency in 2000 after winning Miss Teen Texas and since then, there has been no looking back for her. She has since graced endless international runways for names such as Balenciaga, Robert Rodriguez, Lana Fuchs, Leila Rose, Abaete, Joanna Mastroianni, Rosa Cha, XOXO and Miss Sixty. Her print campaigns include the likes of Philippe Patek and Elie Saab. She has had various opportunities including an international world tour for Versace with visits to Tokyo, Milan, London and New York

Check out Playmate of the year 2009 Ida Ljungqvist