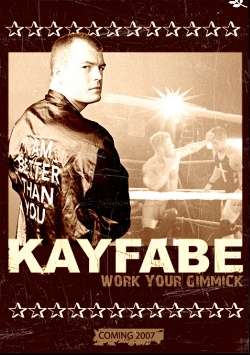 a) The portrayal of events within the pro wrestling industry as “real”.

b) An award winning movie that displays humor in its most honest form.

A lot of times in the world of Pro Wrestling, or “sports entertainment”, there are terms and phrases which are used by the “workers” and “insiders” to hide from the general public what may actually happen in and around the square circle, and the term “Kayfabe” is the mask used to veil the inner workings of this industry. Everything in “the business” is magnified due to its nature being viewed microscopically by fans and the people behind the scenes as well. The movie “Kayfabe”, takes off the mask to show us what can and does happen in smaller, independent local promotions (for that matter, larger, worldwide promotions as well), like the fictional one in the movie, Tri-City International Championship Wrestling Federation (T.C.I.C.W.F.)

This movie is a comedy, especially for those on the outside looking in, and many times while watching, I was caught laughing aloud at certain events, but there is a contrast, which makes this movie very honest and educational for those who watch wrestling, as it is a portrayal of amplified facts taken from actual events.

In interviewing Pro Wrestling personalities, I hear stories on-air and off-air about some of the events that happen backstage. The personalities may be written as “fake”, but they exist. There has been and always been wrestlers and personalities around wrestling who have hit the “big time” (and can not wait to get back) and there are many more who hope to have their chance to have a glimmer in the limelight. “Kayfabe” does not hide these characters in the least bit. I will highlight a few of these:

“The Rocket” Randy Tyler (Pete Smith)
T.C.I.C.W.F.’s top bad guy, or “heel”, is one of the characters who cares about T.C.I.W.F., and Pro Wrestling in general, who is the most level-headed of the crew, and as a veteran, knows what is “best for business”.

Steve Justice (Michael Roselli)
The top good guy, or “babyface” wrestler for T.C.I.C.W.F. who had a brief “cup of coffee” in the big time, albeit anonymously, and wants to make it back sooner rather than later.

Al Thompson (Travis Waters)
A legend in T.C.I.C.W.F., who, behind the scenes, is a foul mouthed, “over-the-top” promoter and has a penchant for creating bad characters, sometimes impossibly, for the wrestlers to try and reenact.

These characters, along with Casa “Super” Nova, Tomahawk Jacques, Marco Pain, and many others, give a very positive portrayal to a business that does not offer itself to optimism (note to the “Powers That Be” T.N.A.: this movie shows how characters should be created to catch the casual fan; you might want to study it). In a “fake real movie about a fake real sport”, it is as real as it gets. Go to your local gym, wrestling show, or wrestling/boxing/ mixed martial arts club for evidence of the honesty these characters they portray (although somewhat amplified).

The movie is shot in as a “mockumentary”-style comedy (think “Spinal Tap” meets “The Office” meets “Arrested Development”) and seems so real that my viewing partner, who is a casual fan of Pro Wrestling (and will be known in future writings as “United States of Tara”), asked at one point if this was real documentary. It is a real-life parody of Professional Wrestling in its most outlandish grandiosity.

Pro Wrestling is a caricature of chaos. From carnivals to coliseums, and a few gymnasiums along the way, it is a distortion of the truth. While encompassed in its bubble, however, the people behind their characters sometimes become their own biggest fans, or “marks”, and “Kayfabe” is “no-holds-barred” in showing this side in a humorous view. It is an absurdity of realism in its purest form.

To understand where a lot of wrestlers/personalities come from, you go to where it all started. “Kayfabe” should be your first step into understanding what happens “behind the mask”. It should also be noted that “Kayfabe” is simply an all-around genuinely good movie for those who aren’t avid fans of Pro Wrestling. The movie of the Bush Leagues of Pro Wrestling is a Major League triple, stealing home to score.

Check out the official site here

Men’s Domain note: This is the first part of our “Breaking & Entering 101” series. Check out part part 2 How to Become a Professional Wrestler