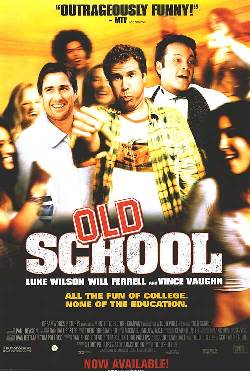 One of the funniest movies of 2003, Old School is silver screen gold for anyone who lived the life of a college party animal or once inhabited the halls of a beloved fraternity house. In the spirit of Animal House and PCU, Old School brings together a strange amalgam of immature males who wreck havoc on their college campus through wild parties, outrageous pranks, and outright criminal activities. Starring Luke Wilson, Vince Vaughn, and Will Farrell (of Saturday Night Live fame), Old School reads like a great SNL skit. You’ll laugh yourself silly over this one.

When Mitch Martin (Luke Wilson) returns home early from a business seminar at his extraordinarily boring job, he finds his girlfriend cheating on him. They break up, and he’s forced to move out. Moving into an off-campus dwelling at his old school, Mitch’s friends Frank Ricard (Will Farrell) and Bernard “Beanie” Campbell (Vince Vaughn) reminisce about the glory of their fraternity days. The days of all fun and no work… Frank gets married, despite Beanie’s attempts to talk him out of it at the altar (during the ceremony), but he quickly grows despondent and longs to enjoy the freedom of his youth once again. Meanwhile, Beanie is a bona fide family man with a successful business, but he too would like to relive the fun of their fraternity days.

Together, the three men decide to turn Mitch’s house into a fraternity. They recruit a series of misfit students from around  campus – nerds, social rejects, homeless men, and ninety-year-old womanizers. The hazing rituals are beyond description, and the parties are ridiculously outlandish and hilarious. All is going well (for everyone but Frank whose wife catches him running down main street naked) until Dean of Student Affairs Gordon Pritchard (Jeremy Piven), a former estranged classmate of the three men, decides to crack down on the fraternity. When he does, the fraternity must pass a series of tests and obstacles in order to retain their charter (and this, the climatic high-point of the film, is also the funniest of all).

Fun from beginning to end, Old School will not win any awards for dramatic scenes or cinematography. But it will win a lot of points as an outright hilarious comedy. If you haven’t seen this film, then you really don’t know what you’re missing. Old School is a classic cult comedy fulfilling the dreams of countless former college fraternity members who ache to relive the greatest party days of their lives. Because it’s so funny, Old School is a definite must-see film. Miss it at your own risk…