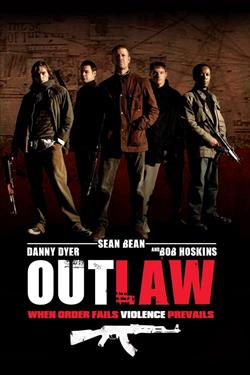 Returning from duty in Iraq, Danny Bryant (Bean) returned home to a London that he did not recognise. Disillusioned with the way he had been treated in the Parachute Regiment and what the country he pledged to defend has become, he decides to take matters into his own hand. Joined by Gene Decker (Dyer) who was brutally beaten after been involved in a car accident, Sandy (Friend) whose face is badly scared from a vicious attack, Simon Hiller (Harris) a disgruntled security guard and barrister Cedric Munroe (James) who is being terrorised by thugs working for a London crime lord he tried to prosecute, Bryant decides to take the fight to the criminal and deal out some real justice.

‘Outlaw’ is another step forward for writer/director Nick Love. He still needs to work on his style as the constantly moving camera becomes slightly nauseating after a while, as does the pulling in and out of focus. His script writing skills have improved however and the film has quite a lot to say but the ending doesn’t really finish the statement he is trying to make. After ‘The Business’ and now ‘Outlaw’, Nick Love is turning into a filmmaker that you might have to start taking notice of.