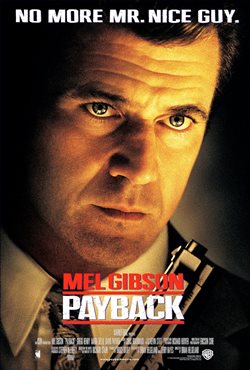 Mel Gibson is supremely entertaining in this funny, dramatic and brutal noir comedy/drama. The film has a casualness and coolness about it that is wild, a hoot and simply a whole lot of fun.

The story starts by introducing us to Gibson’s character, Porter. He explains in narration and flashback just how he got to where he is, which is currently sitting on the table of a backroom surgeon who’s trying to get quite a few bullets out of Porter’s back while drinking quite a decent amount of alcohol. Fixed up and back on the streets, we see Porter in action. He steals from the homeless, robs a wallet and fixes himself up with some new clothes and a nice meal in a sequence that sets up the surprisingly comic deadpan tone of not only Gibson’s character, but the entire movie as well.

We’re also let in on just what happened. His partner, Val (played with zest and good comic timing by Gregg Henry) teamed up with Porter’s ex-wife (played by Deborah Kara Unger of “The Game”) and took a big score from a robbery and left Porter for dead. Back to the story at hand: Porter’s back, and he works himself up the ladder until it seems as is he’s ready to threaten the world at large. And Gibson is so believable that you’d think he just might. Along his journey to the top of the food chain we meet quite a cast of characters, from a taxi czar (played by the always very funny David Paymer from “Get Shorty”). Gibson and Paymer have a comic style of their own, but they work really well in their scenes together. We also meet Gibson’s ex girlfriend, played by Maria Bello. Gibson’s dark character and Bello have some great scenes, dialogue and chemistry together where they talk about the future they could be having together if they had gotten out of all this business ages ago. Both of the actors do a fine job in getting us to care that just maybe they will get away from it all when it’s all said and done.

All Porter wants is his share of the money back. He doesn’t want all of the score, just $70,000 of it. To get it, he’ll destroy anyone or anything. It’s a cold character and although the story says all he wants is the cash, it’s more likely that Porter’s just looking to settle the score with anyone who has the misfortune to step in front of him, which includes a Syndicate boss played well by Kris Kristofferson.