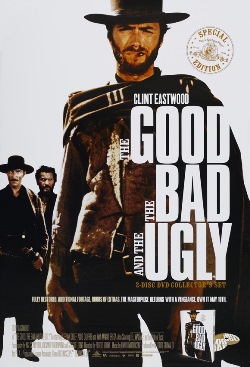 The Good, the Bad, and the Ugly is of course a Western starring Clint Eastwood, Lee Van Cleef, and Eli Wallach, the third in Sergio Leone’s “Man with No Name” trilogy of spaghetti Westerns (a misnomer, actually. Eastwood is called “Blondie” in this film). Most Westerns are about revenge, and while revenge does drive Wallach’s character for a large portion of the movie, these characters are all out for something just as personally satisfying: a fortune in Civil War gold. The three protagonists are more than characters: they are archetypes, each introduced by his own title card: the Good. The Bad. The Ugly. Sergio Leone would play with these archetypes in his next film, Once upon a Time in the West, but they never cast such an iconic shadow as in this film

The Good, the Bad, and the Ugly plot is twisty and wide-ranging, but boils down to simplicity itself: three men traveling across the American South during the Civil War forge alliances with each other and break them just as frequently as they race to be the first to acquire the treasure. The finale, a showdown in a cemetery, is arguably film’s greatest gunfight.

Violence? Copious amounts of it, from fisticuffs to torture to some of the most meticulously choreographed gun violence ever.

Explosions? One mother of an explosion, dwarfed only by another one Leone staged a few years later in Duck, You Sucker.

Hot chicks? Well, no. Sorry. Once upon a Time in the West has a hot chick for the ages, but unfortunately this movie is all about men doing manly things.

Highlights: The aforementioned gunfight finale, the pervasive cynicism and nastiness, Eli Wallach’s enthusiastically amoral Tuco (one of filmdom’s finest marriages of character and actor). Oh, and did I mention the score? Ennio Morricone is one of the greats, and this movie has one of his great scores, which has been reference and parodied in so many movies, television shows and commercials that it’s practically a cliché.

This is simply such a great, endlessly rewarding film that any man who doesn’t own it, in my opinion, doesn’t really care about film. It’s important on multiple levels, from cultural impact to Leone’s growth as an artist to its effect upon Clint Eastwood’s career (virtually every character he subsequently played was either a call-back to or subversion of the laconic gunfighter he portrays here). It’s thrilling, full of machismo, and funny as hell. Having The Good, the Bad, and the Ugly DVD in your collection signals to people that you appreciate great cinema, but you still like to have fun.